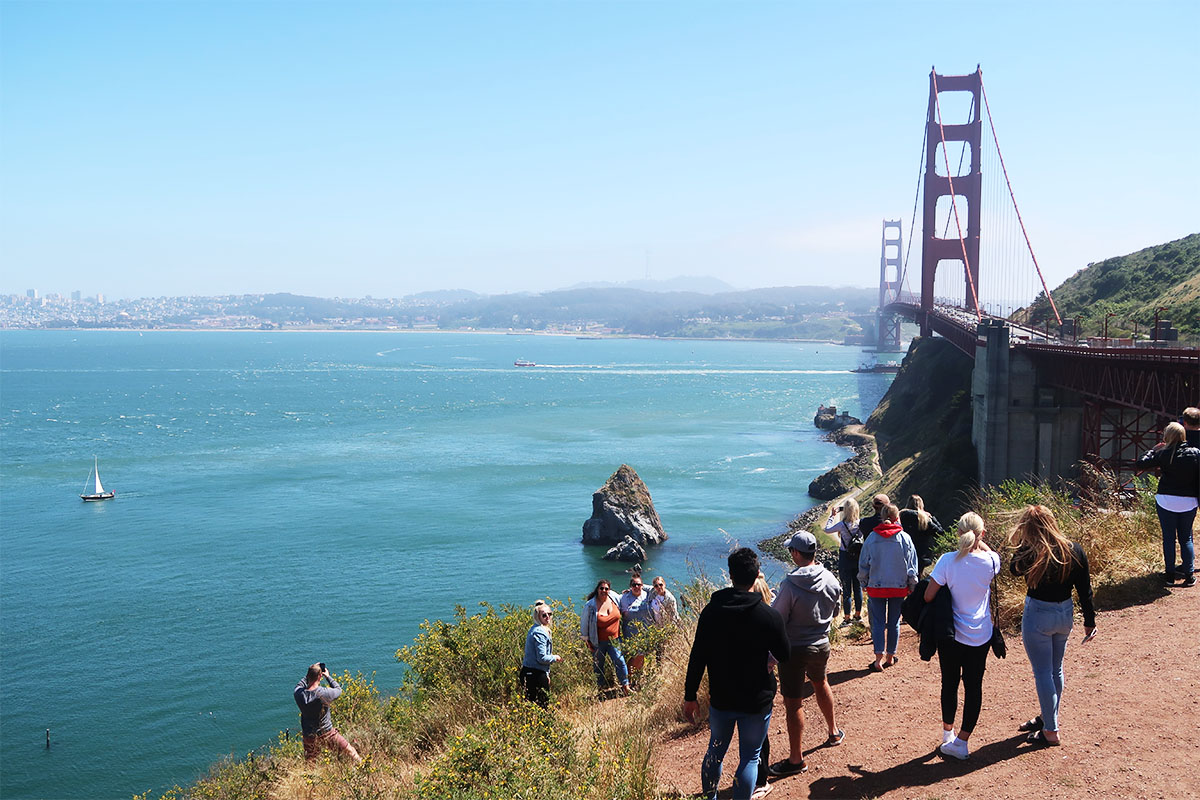 California had been calling for over a year so I finally booked myself on Topdeck’s thirteen day Coast to the Bay tour. Little did I realise the tour would cross country through Arizona and Nevada as well, taking in seven main locations, including Los Angeles, San Diego, Prescott, Grand Canyon National Park, Las Vegas, Yosemite National Park, and San Fransisco. Read on to hear about our epic road trip across west coast USA.

Suitcases stacked to the lobby walls, thirty-ish jet-lagged and hungover Antipodeans sauntered up to the roof-top pool bar at Freehand LA. “Let’s do a roll call and quick tour run-down and then we can hop on the coach” shouted our new tour leader, Sage. Pleased to have checked in two days prior, I sat back with the tour mates I’d met the night before and waited for the fun to commence.

First on the agenda was a visit to Venice Beach, followed by Beverley Hills and Hollywood Boulevard. Sidewalks shining and fountains flowing, money was all around, except in my pocket. So after a full on first day, poolside Caipirinhas in the SoCal sun sat just right with me.

Of all accomodation on this trip, Freehand LA is the hotel you’re going to want to spend some time in. Solid timber bunks provided privacy from roommates, and the pool a welcome sanctuary from Downtown LA.

The next day, patriotism for Peter Jackson’s feature in the Universal Studios back stage tour, plus the Wizarding World of Harry Potter, made a visit to Universal Studios worthwhile. A group dinner later that night and LA was pretty much done. Though it was fun, honestly most people who have visited will say, LA’s not all that great. So enjoy the Freehand’s luxury, and save yourself for San Diego.

Fresh open spaces, laid back locals, and magnificent margaritas welcomed us to San Diego – a naval town and home to one of my favourite night’s out, at The Shout House. Not everyone was convinced of this Piano bar’s appeal in advance, but the dualing Piano’s soon had them on the dance floor. Afterwards we bar hopped late into the night around the Gaslamp District, near our accomodation at HI San Diego Downtown Hostel.

Deciding not to follow the group to San Diego Zoo the next morning, it was a pure surprise to wander into Balboa Park. Secluded courtyards, Spanish influenced architecture, and museum galleries, made it the perfect place to unwind and chat with some locals, before dinner with our group again in Old Town. Tomorrow it was time to farewell the ocean and head inland.

Cactus and border fences stood out on our six hour drive to Arizona. As we rolled into town, a warm hazy sunset filtered through the coach curtains, and Prescott seemed like the perfect small town for an early night. I was wrong.

Cowboy hats, boots, and big personality, made it impossible to resist joining in country and line dancing on Whiskey Row.

“Now open your eyes!” shouted Sage, having led us, eyes-closed, hands on shoulders to the edge of the canyon, and we awed in unison at the red dewy landscape. While half the group opted for the helicopter tour, we descended into the bowl.

Lofty tectonic landscapes plus some touristic donkey had me never quite shifting the feeling it was all a green screen, and just when you thought the day couldn’t get any more hectic, we hit the road for Vegas.

“Why are these lights so bright?” Oh, because Katy Perry had brought us into Vegas. Wierdly, it was raining.

On the way in we stopped at one of the large outlet malls, and a liquor store, then it was a home run to the Golden Nugget Hotel and time for a nap before hitting the strip.

Dramatic outfit changes had us lost looking for our friends in the lobby, and it was clear, we were ready for the party bus. While onboard we stopped for the “Welcome to fabulous Las Vegas” photo, before arriving at Omnia nightclub.

“Waking up in Vegas” required coffee and pancakes, so around midday room service rattled in. Sometime that afternoon shooting down the shark surrounded hydro-slide checked we were awake. Then later that night, round two had us up the ‘High Roller‘ ferris wheel, experiencing ‘Zumanity‘ circus show, and club hopping along the strip.

El Capitan stood tall and strong as we approached Tunnel View point and the entrance to Yosemite Valley. Appreciating the vast landscape and grandiose rock formations made me feel like a blip in time, and eager to get to the start of our hike.

Taking the John Muir Trail led us up to Nevada Falls in the presence of Half Dome, then down the Mist Trail under Vernal Falls.

Spring ice melt numbed us at the first and soaked us at the second falls – the type of deathly cold my feet will never forget.

Staying at  Yosemite Bug Rustic Mountain Resort was just the retreat we needed at this point in the trip. A cooling canopy, card games in a solid log cabin, and Smores around the campfire created a homely atmosphere and brought us back to earth.

“Oark oark” barked the seals as we waited in brisk winds for our sunset sailing cruise under the Golden Gate Bridge.

Bubbles flowing and our trip nearing an end, we discussed how we should plan the night ahead – missing my pre-booked comedy show in favour of yet another dueling piano at Johnny Foley’s cellar bar.

A visit to to Alcatraz, lunch at the Ferry Building Marketplace, a little shopping, and that was the end of my trip. Our accomodation here was HI San Francisco Downtown Hostel.

For more information or to book a tour you can visit the Topdeck Travel website. 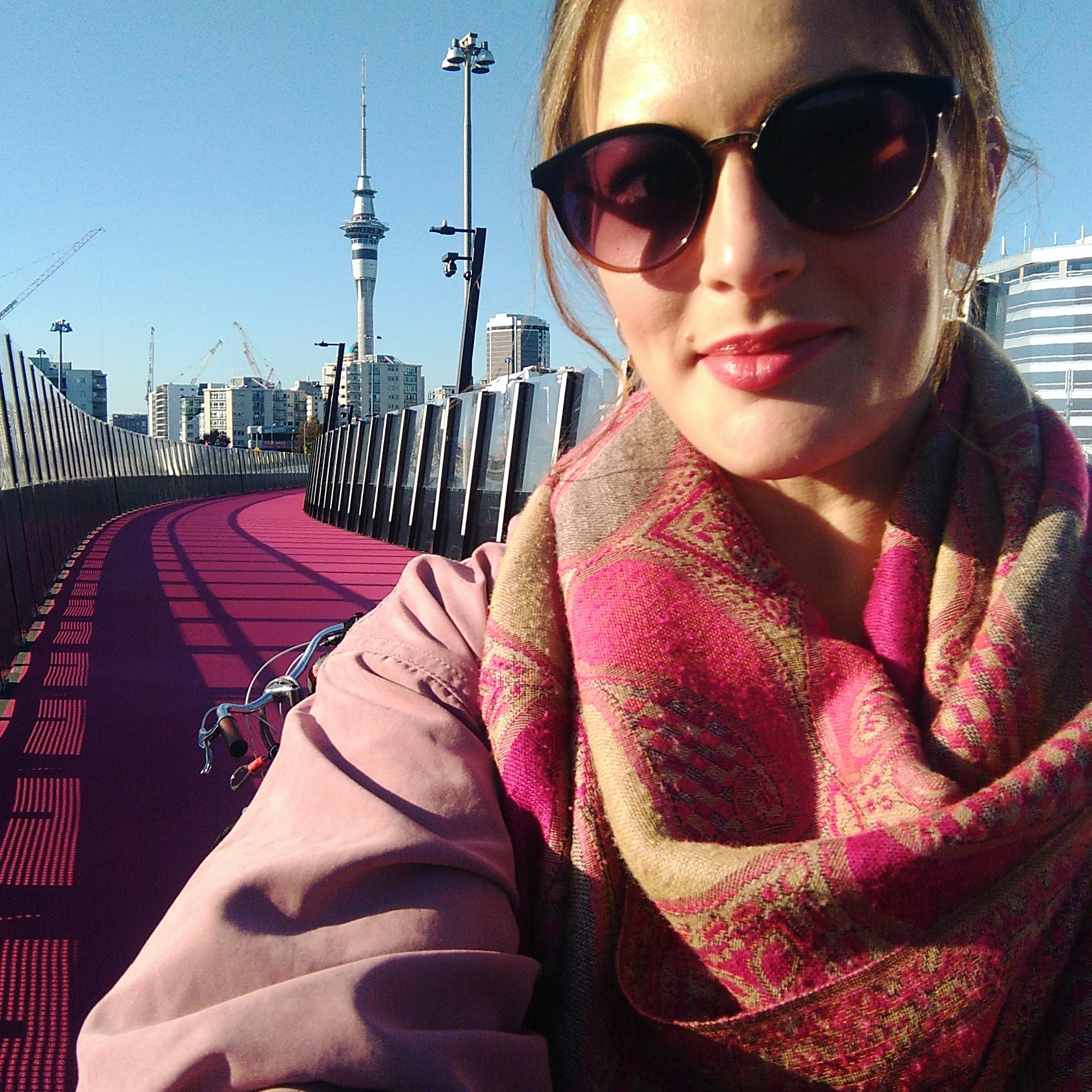 Hey! I’m Nikki and welcome to WorldFanFair – my sanctuary for the soul, and hive for wanderlust.